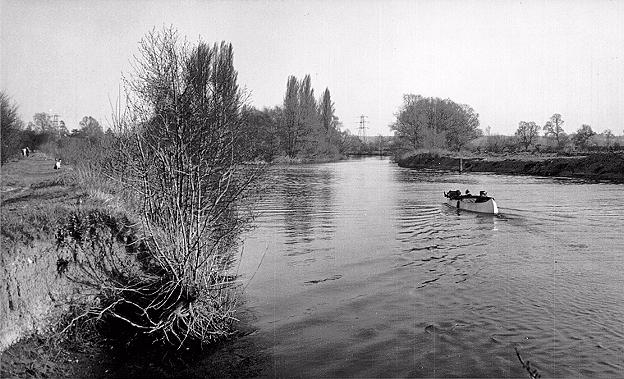 Dorney Reach consists of a few residential streets in the parish of Dorney, in South Bucks. It lies adjacent to the River Thames but isolated from other buildings; the village of Dorney is about a mile away. The surrounding area is rural in character. Although Dorney Reach contains the village school and the village hall, it has no shop or pub, and those who live there must in the main travel elsewhere to work. There is a wide variety of housing within Dorney Reach, in terms of both size and type of dwelling, and in styles dating from the early 20th century onwards. Why was this small settlement built, and how did it develop?

The agricultural land in Dorney is of high quality, and has long been intensively farmed. Bucks CC website records that evidence of a probably late prehistoric (4,000BC – 42AD) settlement - including a field system and trackways – was found in crop marks in a field north of Dorney Reach (Trumpers Field, and motorway embankment) before what is now the M4 was built (see aerial photographs taken in 1957). Further crop marks were observed in the field south of Dorney Reach (see aerial photographs taken in 1975, 1977 and 1980), suggesting a possible Neolithic causewayed enclosure and late prehistoric to Roman field systems, and it is believed these remains would have extended under the area where the houses of Dorney Reach now stand. Large quantities of Mesolithic, Neolithic and Bronze Age (10,000BC – 701BC) flintwork were found in the same area, and on the river bank, just beyond the end of Dorney Reach Road, a fragment of Bronze Age to Iron Age pottery was also found. Many other archaeological remains have been found in Dorney and Taplow pointing to a long history of occupation of the area.

In the early 1800s, the area which later became Dorney Reach was purely agricultural. The only buildings nearby were the old house at Amerden Bank, and the lodges erected by the Duke of Marlborough on Monkey Island. The road from Dorney to Maidenhead passed through, following the route now taken by Old Marsh Lane and Oak Stubbs Lane. Three detailed maps exist for the early part of the 19th century, and these show that the road crossed a large field – 100 acres – known as Oak Stubbs, which stretched from Barge Path to the south to the stream leading from Lot’s Hole in the east, and north to the boundary with Taplow and Hitcham parishes. The first Ordnance Survey map of the area, published in 1822, indicates that the road across Oak Stubbs was unfenced.

The detailed maps show that, within the overall perimeter of Oak Stubbs field, there were several areas which appear to have been enclosed, or at least denoted separately. These included an 8 acre field called Island Close, near the river and the Taplow boundary; Hook Field, a 16 acre field alongside Barge Path; and 21 acres of meadows on either side of the road by Climo’s corner. The tithe schedule of 1840 shows that, apart from these meadows and grassland along the bank of the Thames, all of the land in Oak Stubbs was arable. Three pits were marked within the field, two near the river (which are shown as ponds on one of the maps), and one by the road. These were perhaps originally dug for gravel or lime. Other notable features were a one acre strip for shooting, across the road – presumably cover for game birds – and another acre set aside for stooks. A later description of the land said it was “famous ground for the growth of corn or root crops”.

The picture painted by these maps and the tithe schedule is of an open landscape stretching down to the Thames, with few features and probably few trees, the fields busy with the annual cycle of arable cropping. The river itself was used both to transport goods (the wharf at Bray, on the opposite bank, dealt in particular with coal and building materials) and for fishing, and bargemen and their horses would have been a familiar sight along the towpath.

The tithe schedule indicates that most of the Oak Stubbs land was owned by the Palmer family of Dorney Court, and most of it was rented out to Joseph Trumper. Joseph and William Trumper were very substantial tenant farmers in the Dorney area, probably the major employers in the village at this time. The 1851 census shows that together they farmed over 1,000 acres and employed 79 labourers. A map dated 1812 appears to show Joseph Trumper living at West Town Farm, and at various times subsequently the Trumpers also occupied Dorney Lodge, Lake End Farm and Burnham Abbey. Some of the separate areas within Oak Stubbs appear to have had other owners, including Lady Grenville and the Earl of Orkney, landowners based in the Taplow area.

By the beginning of the 20th century, little had changed physically around Oak Stubbs, but perhaps change was in the air? Monkey Island had become a hotel, its popularity with anglers and boaters boosted by royal patronage.

Around this time, Amerden Bank too became a hotel for a time. The river had become an important leisure resource, and Bray and Maidenhead were fashionable places to visit on a day out. The Fisheries north of Bray was being developed for upmarket housing, including riverside properties sold at a healthy premium. Taplow village had swelled with new villas, their residents attracted perhaps by the convenient rail service to London.

Large new houses had been built at Amerden Grove and Amerden House, and on the river bank south of Maidenhead Railway Bridge.

The Trumper family had gone from Dorney, and although the land would still have been cultivated, perhaps their dynamism was missing from local farming. We can speculate that these factors combined in some way to lead to the decision to build houses at Dorney Reach.

We are lucky to have a note prepared by Lt Col PDS Palmer in 1968 which describes the early development of Dorney Reach, and this is supplemented by the information contained in house deeds and obtained from maps.

The first steps were taken around 1901/2, when Col CHD Palmer of Dorney Court sold a piece of land with river frontage, in the north west corner of the parish on the boundary with Taplow. It included apparently part of the field called Island Close. The first house to be built here was Dorney End, in 1902, at the northern end, followed by adjacent houses

The Chalet (now The Clock House) and The Mead between 1902-4. Access to these houses was via a new road which turned off the then Marsh Lane at what is now the junction of Oak Stubbs Lane and Meadow Way.

The new road followed the line of the present Meadow Way and then turned west along what is now Harcourt Road, down towards the river, finally turning south along what was to become Dorney Reach Road.

The next phase of development was undertaken by Col Palmer himself, around 1904/5, when he built two houses at the southern end of this river stretch – Riverdale, and Bray View (later Overstrand, now Touchdown). Between these two properties, which were built for letting, a footpath led from the road to the river bank, from where a ferry crossed to Monkey Island, which at this time had only ferry access even to the Bray side of the river.

Around 1905/6, Col Palmer built two houses on plots at right angles to and adjacent to the first 3 houses. Dorney Reach House and Island Close (named after the field on which it was built) were the first houses in what became Harcourt Road, at its western end on the north side.

The final stage of this phase of development came around 1908, when the land along the river bank between the first and second developments filled in with 4 new houses – River House, Melrose, Rippledene and Willowcroft.

So by 1910, a total of 11 large houses had been built on or near the river. The riverside properties each owned a section of riverfront, but were separated from this by the towpath, which was sold to the Thames Conservators in 1903. Annual flooding was then an accepted fact, and so the ground floors of the houses were raised up above flood level. Lt Col PDS Palmer’s note captures the character of this early Dorney Reach, and is worth quoting in full:

“The type of person who leased or bought these properties used them as homes and not as weekend cottages. They came there for complete privacy with a river frontage in unspoiled rural surroundings. Their spendable income was such that they could employ and get resident domestic staff and with the resulting freedom and leisure enjoy the amenities of the river. Punts, canoes, rowing boats, white flannels, straw boaters, punting races at Maidenhead Regatta and so on were the order of the day on a river unspoiled by motor boats and riverside development. The towing path was little used and one met there only friends and neighbours. Public intrusion was limited to the passage of the infrequent river steamer. A whistle brought the Monkey Island ferry to meet you when you wanted.”

The next phase of development began in 1919 when Col Palmer sold 33 acres of Oak Stubbs field for building. This land was rented by W H Dickens of Pigeon House Farm and was presumably still used for agriculture. The plot s old effectively amounted to the remaining area of housing in the current Dorney Reach, excluding the row of cottages at the south east corner in Marsh Lane, but including the small section of land to the west of what is now old Marsh Lane on the north side of the M4. In effect, Col Palmer had sold for housing the whole corner of his land on the boundary with Taplow and lying west of Marsh Lane. The 33 acres was advertised in the following terms:

“A valuable field of building land…in the parishes of Dorney and Hitcham situate on a good road quite close to Marsh Lane to which it had a long frontage of about 2,145 feet together with frontages to New Road leading to the Thames opposite Monkey Island.

It is a rare opportunity for acquiring land for the erection of riverside houses or bungalows as it is within short distance of Bray Lock and about a mile from Taplow Station and not very far from Maidenhead Bridge.”

It appears that some or all of the 33 acres was ultimately sold to a London firm of developers, the Honest Housing Company, who later changed their name to Dorney Estates Company Ltd.

By the mid 1920s Dorney Reach had expanded considerably. Two houses were built on plots in Dorney Reach Road (numbers 9 and 11), opposite Riverdale, and houses extended along the south side of what is now Harcourt Road, running east from number 55. These houses were built on long narrow plots backing on to the remainder of Oak Stubbs field; typically about half an acre in size, such plots offered scope to the new residents to grow their own fruit and vegetables and keep chickens. By the time number 29 was built, in 1924, it was proposed to extend the new road east along to Marsh Lane.

About the same time, three more houses on the river were built on a further plot of land sold by Col Palmer. These houses extended south along the river bank from Bray View, and were called Bankyside (later Tirra Lirra), Gable End and Longwaters. Col Palmer had meanwhile sold Riverdale and Bray View.