The Dorney War Memorial was created in the early 1950s on the south side of Village Road, adjoining Dorney Common.

The site was originally a large pond.

The twelve oak trees planted on the site commemorate the twelve fallen servicemen who died in the 1939-1945 Second World War.

Their details are below:

2ND Lieutenant Richard Vernon Cholmondeley was with the 2nd battalion of the Royal Scots Fusiliers when he was killed, on the 18th May 1940, at the age of 30. He is buried in grave V.C.2, Bedford House Cemetery in Ieper, West-Vlaanderen, Belgium.

Richard came from an old English middle-class family, but he was actually born in Australia, where his parents had emigrated to run a vineyard. His father died in 1918, and his mother seems to have returned to her family home in Welshpool, although the family retained ownership of the vineyard and appear to have travelled out to Australia from time to time. Richard was educated in England at Haileybury College, and as a young man was variously recorded as an engineer and a secretary. In 1936, he married Margaret Fry at St Margaret’s, Westminster, and by 1938 the young couple had settled into Old Pond House in Dorney. I believe they had two young daughters. In 1939, Margaret was living in Old Pond House with her children, and volunteering as an ambulance driver.

However, Richard was said to be in Australia – perhaps at the family business - when he joined up in 1939. He became a 2nd Lieutenant in the Royal Scots Fusiliers, which sailed to France in October 1939 as part of the British Expeditionary Force. In April 1940, he was put in charge of a newly formed Fighting Patrol “composed of the toughest and most aggressive members of the battalion”. Aged 30, Richard was regarded as the ideal choice of leader because of “his fitness and aggressive outdoor nature”. Later that month he was on leave, returning on 10 May, the day the battalion learned that Germany had invaded Holland and Belgium. By 27 May, it was learnt that the BEF had been surrounded, and the British troops were making their way as best they could to the coast for evacuation. The battalion, which was in Arras, had to withdraw over a canal by stepping stones because all the bridges had been destroyed. The Fighting Patrol was tasked with providing cover for the withdrawal, which they did very effectively, but Richard was killed on the afternoon of 27 May while leading the attack on an enemy machine gun position.

Colonel Andrew D. Clinch was with the Kings Own Yorkshire Light Infantry when he was killed on 24th April 1942, aged 39. He is buried in grave 5 3 6 Pembroke Military Cemetery in Malta.

Lance Corporal Percy Thomas Robert Evins was with the 1st Battalion of the Royal Sussex Regiment when he was killed on 12th July 1944, at the age of 20. He is buried in grave IV D 15 in the War Cemetery in Arezzo, Italy.

Percy Evins was only 15 when war broke out. He was the only child of Percy Owen and Annie Mary Evins, who had moved to Ivy Cottage in Dorney village by 1929 and then to Sunnyside on Dorney Common by 1930. In 1939, Percy senior was working as a French polisher and a volunteer ARP warden. In due course, his son joined the 1st Battalion of the Royal Sussex Regiment, and became a lance corporal. The battalion was in Italy in 1944, and took part in the bloody battle of Monte Cassino in February/March. By July, they were involved in fierce fighting to take the city of Arezzo as part of the efforts to push back the German forces. Percy was killed on 12 July at the age of 20, four days before the city was liberated. Percy’s parents were still living at Sunnyside in 1954, when his father became one of the founder members of the society set up to look after the memorial gardens in the village. Both the parents outlived Percy by more than 30 years, and are buried in Dorney churchyard.

Sergeant Peter Arthur Ingram was with the Royal Air Force Volunteer Reserve, 106 Squadron when he was killed on the 8th November 1941, at the age of 19. His name is on Panel 46 of the Runnymede Memorial for R.A.F. personnel lost in World War II with no known grave. He was the son of John Leonard and Linda Ingram and the foster son of Allen and Irene Mary Inman of Taplow, Bucks.

Wing Commander Reginald Frederick Stuart Leslie was with the Royal Air Force when he was killed on the 11th July 1943, at the age of 52. He was awarded the Distinguished Service Cross, the Distinguished Flying Cross and the Air Force Cross. He is buried in grave 13 D 20 in Medjez-el-Bab War Cemetery Tunisia. He was the son of Frederick and Emily Leslie and the husband of Nancy Leslie of Chelsea, London.

Lieutenant John Pendennis Dunning McCartney was with Prince Albert Victor’s own Cavalry – the Indian armoured Corps when he died, age 22 on the 18th April 1945. His name is on Panel 28a Taukkyan War Cemetery, Myannmar , Burma. His parents were Harry and Olive McCartney of Falmouth, Cornwall (ref b). He attended Haileybury College and his name appears on the college register of “1862-1994 Pupils of Imperial Service College who died in service of their country”.

Private William George Poole was with the 1st Battalion of the Oxford and Bucks Light Infantry, when he was killed on 4th March 1945, at the age of 21. He is buried in grave 50 E 6 Reichswald Forest War Cemetery, Germany. He was the son of Arthur and Fanny Poole of Taplow, Bucks.

Gunner Benjamin Rolfe was with the Oxford and Bucks Light Infantry, 112th The West Somerset Yeomanry Field Regiment, Royal Artillery when he was killed on 24th September 1944, at the age of 26. He is buried in grave 8 B 17 Arnhem Oosterbeek War Cemetery, Netherlands. He was the son of James and Mammie Rolfe and husband of Margaret Rolfe of Taplow, Bucks.

Sergeant Harold Stevens was with the Royal Air Force when he died on 28th January 1941, age unknown. His name is on Column 244 of the Alamein memorial, Egypt. He was the son of William and Alice Stevens and husband of Florence Stevens of Harrogate, Yorkshire.

Harold Tudor Thomas was an Ordinary Telegraphist with the Royal Navy in the trawler H.M.S. “Ullswater” when he died 19th November 1942, age 22. His name appears number 59.3 on the the Chatham Memorial, Kent. He was the son of Tudor Ceredig and Florence Thomas of Denbigh.

Captain Alan Douglas Comyn was with the Royal Marines, 40 R.M. Commando when he died, age unknown on the 19th August 1942. His name appears on panel 93 of the Portsmouth Naval Memorial, Hampshire. He was the husband of Lydia Comyn of Wychling, Kent.

Following the creation of the Dorney War Memorial the Dorney Memorial Society was set up in 1954.

Its object was to help the Dorney Parish Council to care for and tend throughout the years to come the 1939-1945 War Memorial with pride as a fitting and enduring token of their esteem for their fallen Parishioners who gave their lives for their country in the War.

It is not known when the Society disbanded but the conservation of the Dorney War Memorial is now managed by Dorney Parish Council.

The Articles and Membership of the Dorney Memorial Society is on the file below:

In 1996 the War Memorial ground was refurbished and in 2016 a local resident, Jeff Day, repainted the lettering on the Memorial Stone. 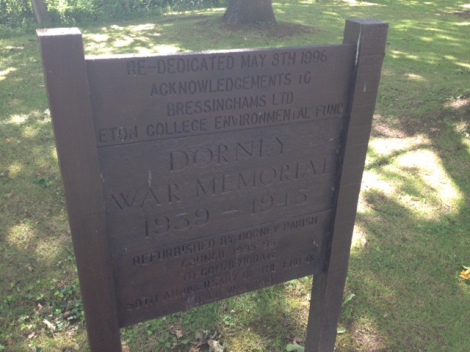