The History of Dorney in Buckinghamshire

to the Royal Borough of Windsor & Maidenhead?

Over the years, a number of people in Dorney have asked the question "Should Dorney, Dorney Reach and Boveney (Dorney Parish) move from Buckinghamshire to the Royal Borough of Windsor & Maidenhead?".

The recent Government decision, to create the Buckinghamshire Unitary Authority, reinvigorates the debate and could be considered by the residents of Dorney, Dorney Reach & Boveney (Dorney Parish) as suggested by the Editor of Dorney Parish News.

Below is a Research Paper on this subject for the Dorney History Group which is an attempt to pull some of the information that is available together, from an historical viewpoint, in order to assist a sensible debate on the question “Should Dorney, Dorney Reach and Boveney (Dorney Parish) move from Buckinghamshire to the Royal Borough of Windsor & Maidenhead?”. I hope it does that.

In 1264 Simon de Montfort claimed to be ruling in the King's name through a council of officials. However, he had effective political control over the government even though he was not himself the monarch, the first time this had happened in English history.

Montfort successfully held a parliament in London in June 1264 to confirm new constitutional arrangements for England; four knights were summoned from each county, chosen by the county court, and were allowed to comment on general matters of state – the first time this had occurred.

Montfort summoned a new parliament for 20 January 1265 which continued until mid-March that year. It was held at short notice, with the summons being issued on 14 December, leaving little time for attendees to respond. He summoned not only the barons, senior churchmen and two knights from each county, but also two burgesses from each of the major towns such as York, Lincoln, Sandwich, and the Cinque Ports, the first time this had been done.

Due to the lack of support for Montfort among the barons, only 23 of them were summoned to parliament, in comparison to the summons issued to 120 churchmen, who largely supported the new government; it is unknown how many burgesses were called.

The event was overseen by King Henry, and held in the Palace of Westminster, London, which was the largest city in England, and whose continuing loyalty was essential to Montfort's cause.

Simon de Montfort's parliament of 1265 is sometimes referred to as the first English parliament, because of its inclusion of both the knights and the burgesses, and Montfort himself is often regarded as the founder of the House of Commons. 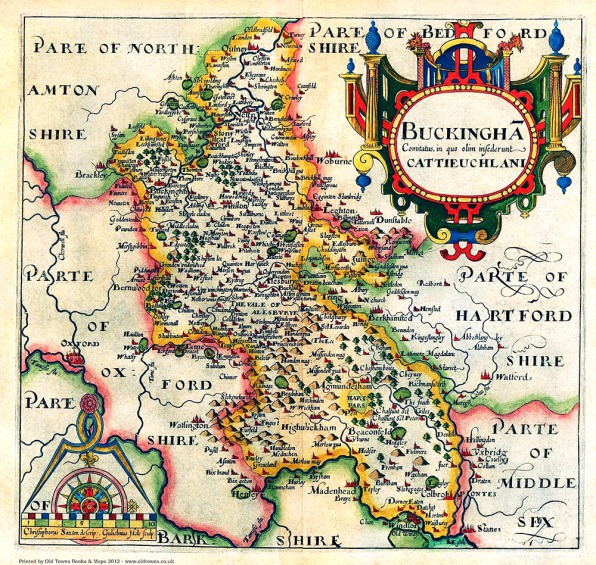 This county constituency consisted of the historic county of Buckinghamshire, in south-eastern England to the north-west of the modern Greater London region. Its southern boundary was the River Thames.

Buckinghamshire has undergone many changes of boundaries since 1884. A list of these can be found in Wikipedia – “List of Buckinghamshire boundary changes”

Eton Rural District was created under the Local Government Act 1894 and took over the responsibilities of the disbanded Eton Rural Sanitary District. It included the parishes of

The district was abolished on 1 April 1974. It was partitioned between Windsor and Maidenhead in Berkshire (Datchet, Horton and Wraysbury parishes) and Beaconsfield district in Buckinghamshire, with a small part of Burnham and Wexham parishes going to Slough.

The most significant of the Buckinghamshire Boundary Changes for Dorney was the Local Government Act 1972 which was brought into Law on 1st April 1974.

Dorney, at that time, was part of Eton Rural District Council.

Eton Rural District was a rural district in the administrative county of Buckinghamshire, England. It was named after but did not contain Eton, which was an urban district.

Eton Urban District was created in 1894 and abolished in 1974. It included Eton Town, Eton Wick, Boveney and Upton-cum-Chalvey.

The first stirrings of what was going to be a ferocious battle are indicated in the Dorney Parish News of August 1971.

The Parish Council have written to the Secretary of State for the Environment opposing the Government’s proposal to transfer the Borough of Slough and the Urban and Rural Districts of Eton from Buckinghamshire to Berkshire.

Under the Local Government Bill just published Bucks is to lose to Berks Slough, Eton Urban District and the Parishes of Dorney, Datchet, Horton and Wraysbury and part of Wexham.

At the Committee stage of the Bill it is likely that Bucks County Council will continue their pressure in Parliament to retain the whole of their present County.

Slough has opted to go into Berks. Eton Urban and the 4 Parishes (Dorney, Datchet, Horton and Wraysbury) have opted to remain in Bucks and the Parishes are now urging their M.P. to try to bring this about.

Eton Urban District and the Parishes of Dorney, Datchet, Horton and Wraysbury have opted to remain in Eton Rural District within the County of Bucks. If, against their expressed wish, these local authorities are compulsorily transferred by Parliament into Berks, then all 4 Parishes are opposed to forming part of a new Slough District and would prefer to be in a new Windsor District. Eton Urban has not yet made up its mind whether to opt for Slough or Windsor. Slough, of course, would like all 4 Parishes and Eton Urban in their new District. That is the position at 14th November (1971) and it is not possible to forecast what Parliament will ultimately decide.

Dorney Parish Council, like others, will remain in being, but it is not known what representation the Parish is likely to have on any new District Council. We cannot expect any great say for our small numbers. It is, therefore, vital for us that we should be in a new District which understands and is sympathetic to small rural communities. Hence our opposition to Slough, and, if we cannot stay in Eton Rural District, our preference [is] for a new Windsor District.

On 6th July 1972 Sir Ronald Bell, MP, Member for Buckinghamshire, South spoke in the House of Commons on the subject of Dorney on Amendment 56 to the Local Government Bill 1972.

"As Dorney is on the north bank of the River Thames, it is strange that it should ever have been thought of making it part of a county south of the Thames. There is no bridge at Dorney and nor is there one anywhere near. Dorney has been in danger of being dragged into Berkshire with Slough.

Dorney is a beautiful village with a strong sense of community and it would be wrong if it were treated as a mere appurtenance of Slough with which it has little connection and no affinity, and I feel confident that the Minister will advise the House to accept the Amendment."

The Amendment No. 56 was agreed to. Dorney remained in Buckinghamshire

The Royal Borough of Windsor & Maidenhead

RBWM was formed on 1 April 1974 as a non-metropolitan district of Berkshire, under the Local Government Act 1972, from parts of the former administrative counties of Berkshire and Buckinghamshire.

SUGGESTIONS FOR MAJOR CHANGES AND OUR INITIAL CONCLUSIONS

(a) West of Slough

It was claimed that the area looked to, and was part of, Slough. The County Council subsequently extended its suggestions to bring into Berkshire all of South Bucks south of the M40 Motorway.

Two alternative options were submitted by Buckinghamshire County Council - a minor tidying up of the existing boundary where it cut through properties, and more substantial recommendations involving a return to the pre-1974 boundary of the River Thames. This latter scheme would have resulted in the transfer to Buckinghamshire of the borough of Slough and the parishes of Eton, Datchet, Horton and Wraysbury.

7. After careful consideration we concluded, from the views expressed to us and our own assessment of the nature of the area, that Taplow was separate from the Maidenhead community, whilst Dorney was quite different from Slough and had little link with Windsor across the river; this suggested to us that both areas should remain in Buckinghamshire.

We also formed the view that although the Lent Rise ward of Burnham adjoined Slough, it was different in character, and we noted that the residents claimed a closer affinity with Burnham village to the north and with South Bucks district as a whole.

We concluded that there was insufficient evidence to show that such large-scale changes would result in more effective and convenient local government.

8. We recognised, however, that the present county boundary west of Slough was unsatisfactory.

We therefore decided to adopt as our draft proposals the original, limited suggestions of Buckinghamshire County Council which, by using Huntercombe Lane as the western boundary between Slough and Burnham, would resolve the anomalies caused by the existing boundary running through properties.

9. We noted that our draft proposals would not have a significant effect on the electoral entitlements at either district or county level in either Berkshire or Buckinghamshire.

Was split into six unitary authorities under the provisions of the Local Government Act 1992. Rather than abolition, its powers were passed to the unitary authorities of West Berkshire, Windsor and Maidenhead, Wokingham, Bracknell Forest, Reading and Slough.

Conclusions as related to Dorney

The minutes of the Parish Council of DEC71 stated “It is, therefore, vital for us that we should be in a new District which understands and is sympathetic to small rural communities. Hence our opposition to Slough, and, if we cannot stay in Eton Rural District, our preference [is] for a new Windsor District.”

At that time it was strongly felt that Buckinghamshire represented small rural communities such as Dorney very well.

However it is also clear that the new Windsor District (whatever that meant at the time) would also have been acceptable.

In December 1971 it wasn’t possible for the Parish Council to know what the Windsor District, as a non-metropolitan district of Berkshire, would actually turn out to be.

Eventually it became a significantly larger and more powerful body than originally expected – with a number of rural communities included together with Maidenhead.

In 1992 it became a Unitary Authority - The Royal Borough of Windsor and Maidenhead - with considerable financial strength.